The City of Hamilton is located in one of the world's richest and most biodiverse ecosystems, with 24% of Canada's biodiversity found in Hamilton alone. As cities become increasingly dense, pressure on urban habitat is growing. Protecting forests is key to our future. Monument Trees highlights ancient trees growing on Hamilton's heritage properties, and celebrates the wider cultural significance of old trees as living artifacts that are critical in the ecological function of our city.

Before the buildings and streets emerged in the early days of Hamilton's history, the landscape was made up of tall native grasses and large Oak trees spotted across an open plain. Nestled between the protective escarpment and the rich habitat in the Hamilton Bay, the ancient trees that grew here were enriched from moisture rising off the Lake. Part of this landscape once included open savanna that was made up of large Oaks and open grassland.

Today many North American cities like Hamilton are built within these former savannas. These lands were flat, and easy to build upon, as they were regularly burnt through natural phenomena and as a form of ecological practice by local Indigenous members of society to promote healthy ecology. These are early examples of cultural landscapes and create context for urban life in our region that predates the City of Hamilton.

In some parts of the city, such as at Dundurn National Historic Site and Auchmar Manor House, trees from this early period can still be found standing. These are our elder trees that stand as living monuments to our natural heritage. 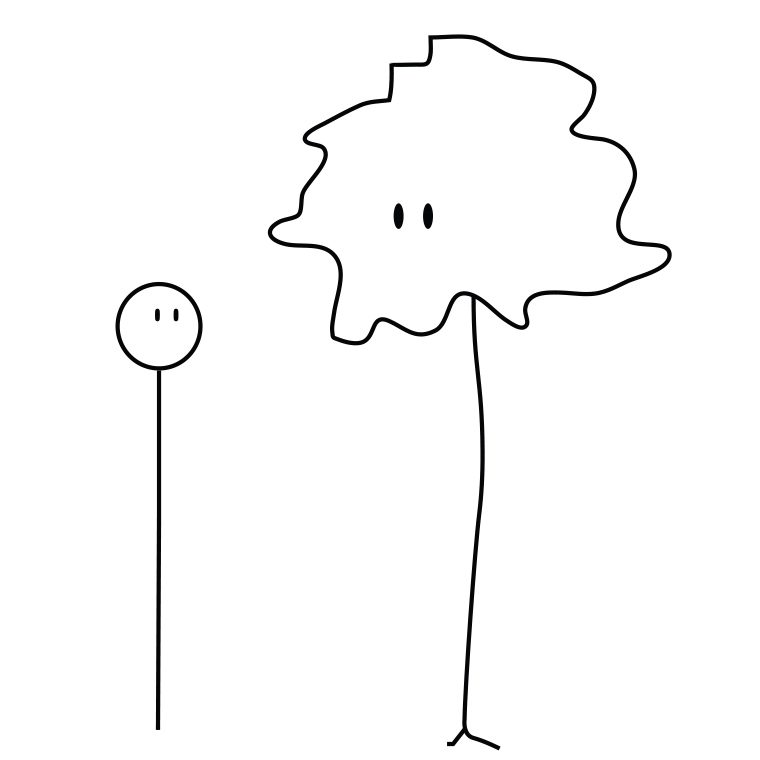 A Tree's Right to Life

Significant heritage properties are usually designated through association with a historical person. What are the limits of this type of heritage designation? If we consider trees as autonomous beings, like people, would this change the way we protect them?

The exhibition Monument Trees raises questions about a tree's right to life and the processes of designation that limit heritage status to a historic person, event, or a building. As an entry point for discussion, this exhibition provides suggestions for new criteria to recognize old-growth urban trees as a new type of living monument. This criteria frames a tree's role in the urban ecosystem, cultural history, and inherent value based on the five core principles of human rights as declared by the UN: dignity, fairness, equality, respect and independence.

A Call to Action

Register your heritage tree. Do you have a Monument Tree growing on your property or in your neighbourhood? Get in touch and put your tree on the map.

Visit Auchmar Manor House to learn about the history of the trees that have called the grounds home for 200 years.

Dundurn National Historic Site is a popular gathering place in Hamilton, but did you know that Dundurn Park is also home to several significant Monument Trees?

Seed School - How to Grow a Forest

How do trees propagate? In the city it is easy to forget about the important role seeds play in the forest. Seeds are our quiet companions in the city. We rake them up, drop maple keys and watch them spin and pull them from cracks in the sidewalk when they become a nuisance. Stay tuned for the an upcoming AR component of Monument Trees, entitled How to Grow a Forest, to learn more about how to care for tree seeds.

The forthcoming AR artwork will serve as an intermediary space between the landscape and the classroom. Through interactive virtual media, children will be able to share their stories and learn about the urban forest.

Lesia Mokrycke is an interdisciplinary artist and landscape designer who founded Tropos as a space for new forms of practice in art, landscape architecture and urban design. Her current work, Building Conservation Networks is spearheading new and innovative approaches to conservation in urban areas. As an interdisciplinary art and urban design initiative, Lesia's project began in 2018 as part of her graduate research, and was further developed through a grant she received from the Canada Council for the Arts, Research and Creation component. The work builds on previous work in Lesia's practice as a public artist to bridge art and landscape architecture and foster new approaches to creative engagement, ecology, and social practice that enhance the urban forest.

Building Conservation Networks is a creative urban design and public art project that identifies historic, monumental trees as key anchors in the ecological and cultural life of the city. This large scale art and urban design project presents a strategy for restoration through new models of conservation that can enhance the urban forest. The exhibition titled, Monument Trees is the first part of this work and focuses on documenting and celebrating the rich history and heritage of our city's oldest living monuments. These landmark, matriarchal trees contain hidden information in their roots that can give us information about times past and nurture new sapplings to foster stronger and more resilient urban forests. Through mapping the location of these pre-settlement trees across the city, Lesia's work with Building Conservation Networks is laying the groundwork to create a more ecologically resilient city that can withstand coming changes in the climate

Special Thanks - Cathy Plotz at Hamilton Conservation Authority, Kathy Renwald with CBC Hamilton, Education team at the Royal Botanical Gardens, City of Hamilton Culture and Heritage Department, Hamilton Naturalists Club, Downtown AM Rotary Club of Hamilton, Downtown Sparrow, Justin Chandler at TVO, and each member of the Hamilton community who has contributed a tree to this project.